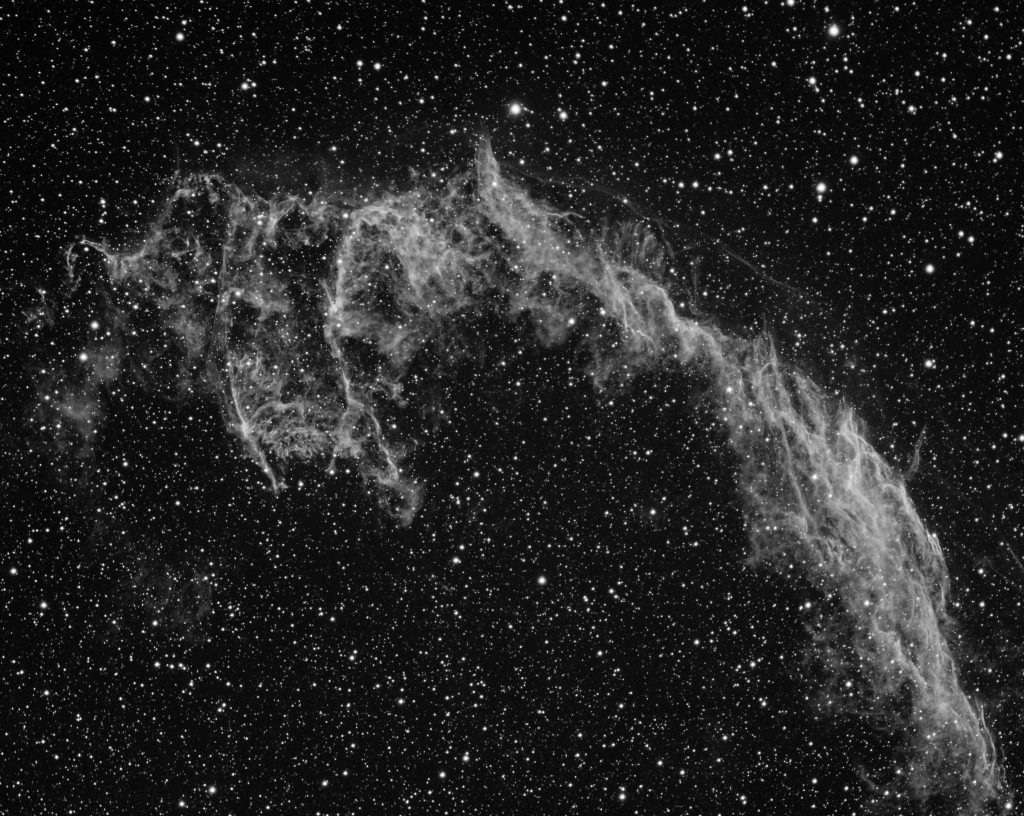 As Summer draws to a close we find Cygnus the Swan nearly directly overhead by astronomical twilight. Cygnus is a narrowband wonderland overflowing with emission objects for both small and large fields of view. One fine example is the Cygnus Loop, or the Veil Supernova remnant. Formed by a supernova that occurred some 5,000 to 8,000 years ago, this large loop of nebulosity spans some 100 lightyears across and is located approximately 1,470 lightyears away (an update over older estimates which placed it at least 2,500 light years away).

You need about a 4 degree field of view to capture the entire extent of this object, such as the one shown here captured with a 200mm focal length telephoto lens (Canon 200mm f/2.8) on a QSI 683 camera (8300 based chip). This was imaged with 3nm narrowband filters and then colorized using the popular Hubble Palette mapping colors to the individual narrowband wavelengths (green to hydrogen, red to sulphur, and blue to oxygen).

On the far right hand side of this image is the Western Veil Nebula (NGC 6960), often just called the Veil Nebula. My favorite unofficial moniker is the Witches Broom. It is especially striking when imaged with not just RGB filters, but also supplemented with some Ha and OIII data, such as the one shown here. (Esprit 80 Refractor, Starlight XPress Trius 694, Baader filters). The bright star riding the broomstick is the star 52 Cygni, which is a bit closer than the nebula (only 291 light years), and is just in the line of sight of the edge of this feature.

High resolution images of this area reveal a complex cosmic web of smokey tendrils. Not only is the area bright in RGB broadband light, but it’s also brilliant in Hydrogen Alpha, and OIII.  In fact, the OIII emissions of the entire super nova remnant here is among the brightest of many emission objects you can shoot.

The object is named for a director of the Harvard Observatory, but it was actually discovered by a female astronomer who was once his maid (you can’t make this stuff up), Williamina Fleming. Fleming’s Triangular Wisp is another popular, but also unofficial name for this feature.

The Eastern Veil nebula (NGC 6992) is also an amazing object in and of itself. Presented here in monochrome shot with a narrowband filter that captures light from glowing Hydrogen gas (Officina Stellare, RH-200, Starlight Xpress 694 camera).

Sometimes called Cirrus Nebula East, or the Spider, or Bat nebula, it is a worthy member of the Veil complex. The wispy filaments of glowing gas are simply etherial. It should be pointed out that in addition to photography, an OIII visual filter renders most of the Veil complex quite well with a glowing ghostly quality that is breathtaking. I’ve seen it in scopes as small as 6″ and it even very closely resembles the images shown here.

Cygnus is one of my favorite regions of the sky, especially for narrowband backyard imaging. The Veil complex has treasures for all focal lengths and chip sizes too, and if you don’t have narrowband capabilities, it is bright enough to shoot well even with a one shot color camera using a light pollution filter. Go get some of it before it’s gone!