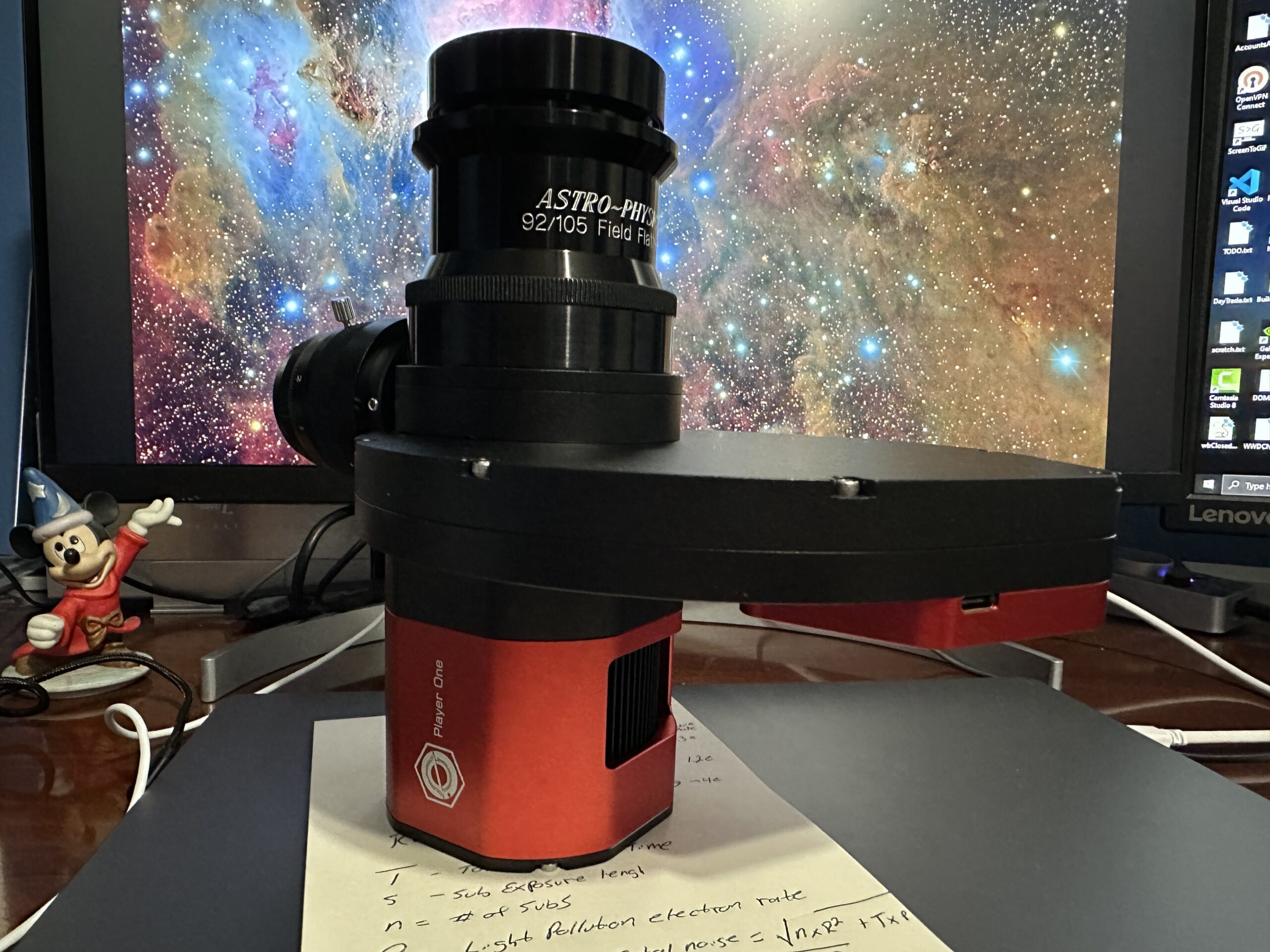 I plan to do a longer and more thorough report on the Player One Poseidon-M camera at a later date, I’ve only just received it recently and have had a spotty few nights out with it, but I’m pretty impressed so far. I ordered a full set of Chroma filters for it, and my first clear night the only filter that had arrived was a 3nm Ha (Hydrogen Alpha) narrowband filter. The Moon was up and well, Ha is great in the moonlight, and I could not wait to try the new toy out.

Well, who doesn’t shoot M42 when they get a new camera? It’s bright, it’s pretty, and it’s loaded with glowing hydrogen gas — I have a shiny new camera and high quality 3nm hydrogen filter. I wanted to see how much detail I could get out of the trapezium, which is the very bright core of M42, so I experimented to see how long I could go without saturating that region. I was shooting at high conversion gain (HCG), but could go a full minute and still make out the four stars of the trapezium. The screen stretch showed glorious detail already and so I decided one minute was enough.

Orion passes between two trees from my backyard each night, and I only got 104 of these one minute exposures over two nights, but it was quite enough for an impressive image non-the-less of the entire region. I would have liked to get more to reduce the noise in the outer areas, but it is definitely good enough for the internet as is. One minute narrowband subs (oh, this was at f/7 by the way) is pretty impressive, but I have to admit, M42 is a pretty bright target, so I tried a few others also at shorter exposures.

I did some one and two minute exposures on the Rosette and the Tadpoles and stacked equivalent spans of time for each. The one minute stacks did not suffer from what I could tell from a qualitative inspection vs. the stack of two minute subs (both stacks of about half an hour).

I also did 162 x 60 seconds on the Cone nebula region. The screen stretch of the individual subs was very faint on this region, but the stacked result was quite spectacular I thought. The fox fur region is just loaded with detail and subjectively I’d say it’s every bit as good as what I used to do with CCD’s and longer (individual exposures).

I’ve been speaking about the new age of shorter exposures for a while now, but I’ll abbreviate my thesis in that shorter individual exposures are becoming more usable due to camera improvements, but the total integration time for a quality image has only diminished very slightly due to increases in QE (Quantum Efficiency). There is still only so much light coming from astronomical objects, and it still takes hours of total integration time to create a very high quality image. These images look great on the web, but if I were to print them or display higher resolution versions, I’d want a little more integration time to better smoothen them out (from shot noise).

I plan to push on this camera pretty hard, do a lot more experiments (both qualitative and quantitative), write some software, and take some pretty pictures. Stay tuned…

Oh, and if you can, be sure and catch my talk on “The Future of Astrophotography” at the upcoming Winter Star Party, or you can read a reprint of my August 2022 Sky & Telescope article “The Next Big Thing” here.